What is the “blocking” phenomenon?

The blocking phenomenon is well known and familiar to many manufacturers of plastic films, based mainly on polyolefins, PP, and PE but also on other polymers such as PA and PET. This phenomenon consists in the clinging/ adhesion of film layers rolled on a core and causes a “block” of layers that makes it difficult to open the film. The usual reason for this phenomenon is the van der Waals forces that act between the layers and cause them to stick upon rolling and compress due to the own weight of the film in the roll. Another reason could be low molecular weight materials that tend to migrate to the surface of the film and thus create the adhesion. The simple way to solve this problem is to add active ingredients known as antiblocks. The additive produces microscopic surface roughness, thus preventing the adhesion of the layers (Fig. 1). It also reduces the coefficient of friction (CoF) of the film.

There are different types of antiblock additives that are mainly divided into two types: organic and inorganic (Figure 2). The type of additive should be suited to the final application of the product, since they differ in their properties – particle size and shape, degree of migration, dispersion within the raw material, thickness and temperature of use of the product and, of course, their effect on the appearance and final price of the film.

Kafrit organic AB additives are based on cross-linked polymer particles, of uniform spherical shape and very narrow particle size distribution (Fig. 2). Antiblocks of this type have good transparency and impart low CoF to the film. They are also significantly more expensive than inorganic additives and are therefore used in products where there is a demand for high-tech features and complex applications (high-end).

Kafrit has developed and offers a wide product range that provides solutions for different applications and different final performance requirements (Table 1). In addition to the examples shown below, the company has a broad product range in the field, including integrated products that include a number of different features in one concentrate. The company strives to achieve compatibility of the various additives so that one feature should not come at the expense of another. In addition, the company adapts the various antiblocks to various processes and other required features such as lamination, printing, corona, anti-fog presence etc. 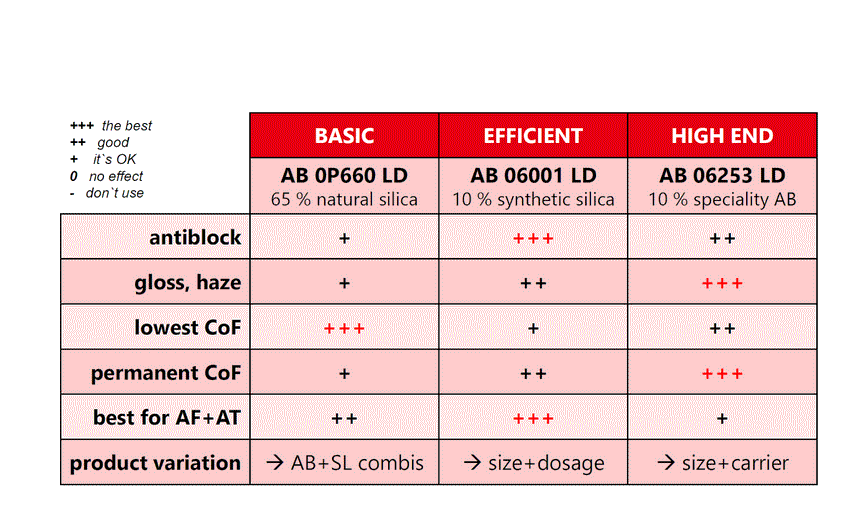 Kafrit launches innovative, high-performance antiblock additives for BOPE films. These films are considered to be “next generation films” because they allow the production of films from PE only, without the need for additional polymers in additional layers. They allow for a significant reduction in the thickness of the film, compared to an unstretched film (from 100 to 40 microns only) without loss of mechanical properties. These features allow the film to be easily recycled, since it is made of one polymer only.

These and other Kafrit products will be on display at the K-2019 trade fair in Hall 8A, Stand F20.

For further information on antiblocks: