By Hannah Schwartz and Michael Webber

The way to deal with these problems is by carefully selecting the raw materials and matching them to the right process conditions. However, sometimes despite these attempts, flow disturbances still exist and additional means must be adopted to cope and reduce them.

This is where processing enhancing additives (polymer processing aids, PPA) enter the picture. These additives are based on fluoroelastomers and fluoropolymers. In fact, these are polymers that contain fluorine (F), which has greater affinity to metal than the polyolefin matrix. Thus, these materials cling to the machine’s walls, the screw barrel, and the die lips, significantly reducing flow disturbances and their results.

To better understand how the PPA helps in manufacturing, let’s first try to understand the root of the problem or in other words, why do surface flow disturbances occur?

When the polymer flows on a stationary surface, the metal walls of the screw barrel and the die, it is subject to great shear stresses and exhibits resistance to flow. Thus, the portion near the walls has a slow flow velocity, different from the flow velocity at the center of the melt. When the material reaches the die lips and is detached from them, there is no longer a fixed surface that impedes its flow. Over a short period of time and at a short flow distance, the outer layer of the polymer must “catch up” and increase its flow velocity to match the velocity of the rest of the melt (Fig. 1).

Illustration of the flow gaps between the melt velocity (V0) and the velocity along the die walls (V1). After exiting the die, these velocities must even out.

When the flow resistance of the material is high and the gap between the shear stresses and the melt velocity reaches a critical value, the polymer chains are overstretched, cannot cope with the velocity gap and “tear”. This phenomenon, also called melt flow disturbance, creates visual defects on the surface.

The equipment makeup and the work method also have a great influence on flow disturbances: the space between the die lips, the throughput rate, the film structure, and the composition of the layers having an influence on the polymer flow and the phenomenon mentioned.

Processing enhancement additives (PPA) allow to reduce and even overcome flow disturbances. The PPA and the polyolefin matrix in which they act are not compatible. Thus, a separate phase of insoluble PPA droplets is formed within the polymer. These droplets reach the surface of the barrel and the die at random. Due to the chemical composition of the processing aid additive, there is a chemical attraction between the fluorine (F) atoms present in the PPA and the metal. The PPA additives cling to the walls of the die and the barrel, creating a sliding surface that coats the melt channels. The coating of the metal is dynamic and during the production new PPA drops reach the metal, clinging to it and renewing the sliding layer. This layer allows for better sliding of the melt against the stationary metal walls. The polymer resistance to flow decreases significantly and the unwanted result of over-stretching and “tearing” the material decreases and even disappears (Fig. 2). It should be emphasized that the addition of PA does not change the color of the product and does not affect the transparency of the material.

In addition to the lessening of flow disturbances, there is another benefit to working with PPA: working pressure is significantly reduced due to better sliding of the polymer on the walls of the die and the barrel. This makes it possible to significantly increase throughput by up to about 45%.

Another problem that arises during extrusion is the accumulation of unwanted materials on the lips of the die. These deposits sometimes accumulate inside the die itself. When these accumulations detach from the die lips, they enter the final product and visual impair its quality. The obvious solution is stopping the line to clean the die lips, but this shuts down the machine and creates much waste at each resumption of production.

The source of dirt buildup is diverse and can be divided into several factors. First, there are substances that tend to accumulate in the outer layers of the material. These include low MW polymers, various fillers, volatiles, and pigments. Lack of uniformity in melt viscosity and pressure changes during work may cause such a situation.

The type and condition of the production equipment and the way of working with it also have a major impact on the buildup of dirt of the die lips. A die not properly cleaned before starting work, a problematic gap between the lips, too low an angle of the melt when it comes out of the die, too high processing temperatures approaching the polymer degradation temperature, and die swell (melt swelling due to pressure differences) are only some of the factors that increase accumulation of dirt on the lips of the die.

In this case, too, using PPA can significantly reduce the problem (figure 3). Significant benefits: using PPA reduces line shutdowns for cleaning, allows lowering work temperature and saving energy, and the presence of gels in the final product diminishes. Another advantage is that PPAs also work as additives to improve cleanliness and help to exit faster from a color in production (figure 4). 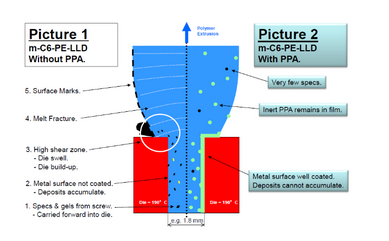 Comparison of a process with and without PPA, a solution for die buildup and melt disorders 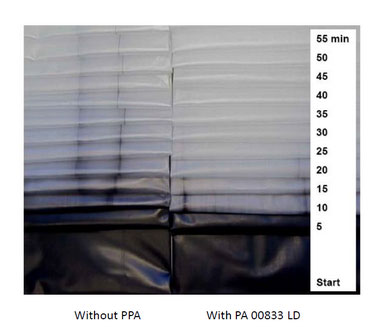 Differences in exit from a color with and without PPA

It is important to emphasize that work should begin with 15 minutes of rinsing with processing aid additive at a high concentration (2500 ppm) in the outer layers. This makes it possible to rapidly get a good pre-coating of the extruder and the die walls. The PPA that is then added to the outer layer is introduced at a lower concentration (100-500 ppm) and is intended to preserve the initial layer created and maintain it in its entirety.

Kafrit recently launched a new addition to the broad range of PPA solutions it offers. The new grade, PA 00S08 LD, is based on LDPE. It is unique in that it incorporates both a processing aid and antioxidant activity. Thus, synergistic activity is achieved, which fights the formation of gels in the film. The material is designed for use at high processing temperatures, reduces the buildup of dirt on the lips of the die, and is designed for flat die (cast) extrusion applications and pipe extrusion.

This technological innovation joins a long list of processing aids that address a variety of applications including blow molding and cast extrusion (Table 1). The concentrates contain 1% -5% of PPA in a matrix of LDPE or LLDPE, and usually have an additional synergistic component for enhanced activity. They are suitable for a wide range of temperatures, including working at an extreme temperature of 310 ºC. Some are even suitable for challenging MLLDPE-rich compositions known for their limited flow capabilities. The concentrates have excellent dispersion of the active material within the polymer matrix (Fig. 5). 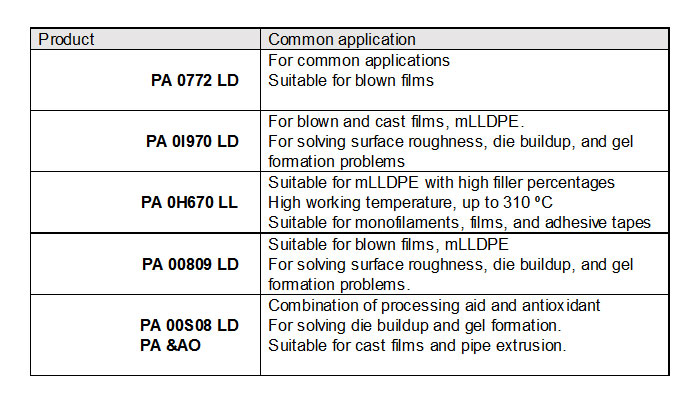 Kafrit’s quality control is tight and ensures repeatable and successful production. Each raw material batch is tested for a number of parameters: color testing, material density, and MFI testing. The level of addition and the production conditions are documented. The active material dispersion is tested and an sample of the production is kept for control for a period of two years.